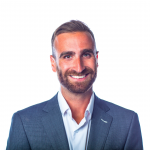 ANDOVER, MA— ALKU, a nationally ranked niche-based staffing firm, has expanded its Senior Leadership Team with the promotion of Nick Vignone promoted to Vice President. Nick started at ALKU in June of 2011 as a Recruiter in the General IT Division after graduating from the University of Massachusetts Amherst. ALKU’s commitment to growing organically through opportunity, training, and hands on experience is exemplified with this strategic promotion.

Over the past 10 years with ALKU, Nick has continuously embodied the characteristics of an excellent leader. From his very first promotion to the PeopleSoft Recruiting Manager in October of 2016, Nick has worked tirelessly to help train, develop, and mentor every person that he has worked with, to set them on their desired career path.

The effort that Nick has put into promoting the growth of others under the Technologies umbrella is second to none. Nick has truly risen to the challenge of helping the company reach every level of success. Beyond Nick’s strong leadership capabilities, he’s a role model for others through his advocation for everyone in the company. Recently Nick received the first ever ALKU Women Empowered (AWE) Inspire award for his support of women in the workplace and AWE’s mission. Nick embodies ALKU’s pay it forward mentality to the fullest.

With this and much more, ALKU is thrilled to announce the promotion of Nick Vignone to Vice President!

In Nick’s new role as Vice President, Nick will have complete oversight for all revenue and operation within the Technologies umbrella to help achieve the company’s overall goals and initiatives.