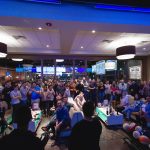 In December 2020, Salesforce Recruiting Manager, Jenn Dupuis, lost her mother, Julie, due to a tragic car accident. Julie has always wished to become a grandmother, but unfortunately, she passed one week before her first grandchild was born, which led to the creation of Julie’s Giraffes.

This program was founded to share Julie’s love with each newborn baby at the Elliot Hospital in Manchester, New Hampshire, where Julie had worked for over 37 years as a Radiology Supervisor. Since Founding this program, the Dupuis family has decided to expand their fundraising efforts and started a scholarship fund that is awarded twice a year to a rising senior in the radiology field.

On November 3rd, ALKU hosted the first annual bowling fundraiser in support of Julie’s Giraffes, created by SAP Recruiter, Nick Grossi. Nick, a personal friend of Jenn Dupuis, came up with the idea and brought it to our Community Relations Coordinator, Elvis Bisono. ALKU loved the proposal and will continue to hold this event annually. The event was held at Wamesit Lanes in Tewksbury, MA, from 5-8 PM. The ALKrew filled the event and had a fantastic time supporting an even better cause.

The night started with raffles and live auction prizes while enjoying drinks and appetizers with friends. Some auction items offered included Patriots v. Bills Tickets, Ovanes Cape House, and ALKU YETI Cooler. Some raffle items included were gift cards, ALKU Yetis, gift baskets, and more! Following the raffles and auction, the ‘Krew participated in bowling for the rest of the evening.

“When I approached Elvis and the Marketing team with the idea, I knew this was gonna be a special event! We all love Jenn at ALKU, and if anyone had the chance to meet her mom, she was a very caring and giving Woman! The way that ALKU showed up last Thursday speaks volumes about what being part of the ALKREW is all about! $21,000!!! We doubled what was expected! I want to thank everyone again that attended last week and to those who donated as well!” -Nick Grossi

In total, the ALKrew raised a total of $20,750! We can’t wait for the 2023 bowling fundraiser in support of Julie’s Giraffes!