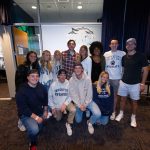 This year, ALKU has signed its first college marketing and sponsorship agreement with the athletics departments for James Madison University, University of Massachusetts Amherst, and University of New Hampshire.

This three-year agreement allows ALKU to gain an expansion of outreach to students. Marketing opportunities include using digital, event space, signage, and sponsorship in the three Universities’ sports spaces.

On Saturday, November 5th, ALKU held its first sponsored event at UNH, ALKU Skybox Social! This event was held from 5-7 PM before the UNH vs. Northeastern hockey game. Fifty tickets were allotted to Interns and ALKU employees who are alumni of UNH and their plus one. Additionally, interns who received full-time offers and their plus ones were invited. The interns received box seats for this particular game day!

Food and drinks were passed around before the game, allowing alumni and interns to mingle and network before the big game! This was an excellent opportunity for ALKU alumni to reminisce about their time at UNH and connect with interns joining ALKU full-time in the upcoming months.

ALKU had a PA announcement throughout the game that urged viewers to scan the QR code to enter to win an exclusive ALKU YETI cooler! Additionally, viewers of the game could hear a bit about ALKU and learn about our website, where they can learn more and view available positions!

“As a UNH Alumna now managing UNH interns, it was a full circle moment to see our interns network with other Alumni turned ALKU employees in such a fun environment. Some of the interns had never been to a hockey game here and felt special that ALKU would invest enough in them and their school to put on an event like this. Many UNH Hockey ticket holders and Durham community members were with us in the Skybox. They had never heard of ALKU, allowing us to expand brand recognition and show the value ALKU brings to Durham and the students of UNH.” -Caree Pitts

ALKU is thrilled to hold this marketing and sponsorship agreement with the athletics departments for James Madison University, University of Massachusetts Amherst, and University of New Hampshire. We look forward to our next event; stay tuned to learn more!

Are you interested in joining the ALKrew? Click here to learn more about us and view our open roles and internships available!