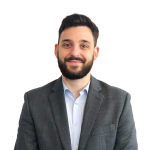 We are thrilled to announce ALKU’s newest Employee Resource Group (ERG), ALKU Veterans! The Mission of ALKU Veterans To help provide support for other Veterans and family members as well as to help spread awareness to the employees of ALKU about life after serving in the military. ALKU Veterans is sponsored by Dave Bruner and Leah Bourdon and led by Christopher Carney and Anthony Sicari!

Recently, we sat down with Anthony to ask him questions regarding himself and the future of ALKU Veterans. Check out the ALKU Veterans Table Talk below for all the details on ALKU’s newest ERG!

What do you hope the future of the ALKU Veterans ERG will bring?
There are a few things that I hope the ERG can bring to ALKU. I believe the first will be bringing general awareness of what it means to be a Veteran and, most importantly, breaking down stigmas. The other thing we can do is use this as a tool to increase Veteran recruitment across ALKU.

What motivated you to create ALKU Veterans?
In my last company, I helped lead the Veteran initiative. It became an incredible recruitment tool to help Veterans transition to civilian life with work. It also helped to bring all the Veterans closer together. Veterans tend to bond with other Veterans.

What are you most excited about since implementing ALKU Veterans?
The chance to bring other people at ALKU into this ERG and teach them what it means to be a Veteran. Behind that title, we are all different people with different reasons for joining.

What are some things you want Veteran allies to be aware of?
There are a LOT of stigmas Veterans carry; bad temper, alcoholism, and drug abuse, to name a few. Unfortunately, this covers veterans as a blanket stereotype that is often untrue. Because of these stigmas, many Veterans struggle with transitioning out of military life and finding a promising career.

Who is your biggest role model, and why?
My biggest role model is my mother. She raised me, my brother, and my sister by herself while working two jobs and going to get her master’s part-time. It’s hard to appreciate how time-consuming and exhausting that must be, and she always found time for anything we needed.

What is one thing/activity that improves your day-to-day life?
This may seem simple, but friends and family. Having such a good support network has helped me form relationships that I can always rely on, both good and bad.

If you enlisted, what were some reasons you joined the military? How did you choose your branch of service?
I joined the Army because my father, uncle, and grandfather served. My father served during peacetime, my uncle fought in Vietnam, and my grandfather in World War II. They were people I considered role models growing up, and I wanted to serve in hopes I would become as good of men as they were.

How did you imagine military life before you joined? How did your perceptions change after serving?
I imagined military life as a lot more glamorous, to be frank. The media does an excellent job portraying the military as if everything you do all day is so heroic—the commercials of jumping out of helicopters, saving children from floods, etc. In reality, it was quite the opposite. The point of the military is to teach people respect and attention to minute details. Everything is preparation based. It teaches how to do everything in the right and honorable way.

Is there anything you wish civilians understood about military service?
I wish they understood how different it is. On active duty, you are on a post with only other military people, often far away from friends and family. It’s hard to focus on a task like that, and we choose to do this because we respect our country and our desire to try and protect the people we love.

What did you learn about yourself from your experience serving?
I learned I was significantly mentally stronger than I could have ever believed. Nothing is impossible when you try hard enough. Basic training involves; no sleep, little food, intense heat, and constant mental stress. By the end of the process, I realized that it was something I never saw myself accomplishing. By taking that leap of faith and believing in myself, I did it, and now I carry that mentality throughout my life.

What motivated you to serve?
My Family. My father served right after Vietnam, and he never saw combat. My uncle was drafted and served two tours in Vietnam in the army. My grandfather served in the Army in World War II to fight the Axis powers. They were the strongest men I know, and I wanted to be like them.

ALKU Veterans Bio:
The purpose of the ALKU Veterans ERG is to offer a sense of community between veterans and their non-veteran peers, and to help spread awareness of the problems that veterans face daily.