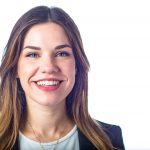 Anna started her ALKU career in June of 2015 and has been an asset to the Personnel Services team and ALKU ever since. Anna is the epitome of what it means to be an ALKU leader. She is approachable, knowledgeable, and passionate. She is dedicated to her team and continually seeks ways to make Personnel Services and ALKU stronger and a better workplace.

Anna has accomplished more than words can describe in her seven years with ALKU. To name a few milestones, Anna won CEO’s choice in 2016, helped implement Bullhorn One, and won the AWE Inspire award in 2021. Not to mention, Personnel Services won the 2021 Corporate Division of the year. Anna has accomplished an immense amount thus far in her ALKU career.

Outside her day-to-day role, Anna is an active member of several Employee Resource Groups (ERGs), including the DE&I Council, State of Mind, and AWE. Anna continuously stands out for empowering her team and women company-wide at ALKU.

Congratulations, Anna! We can’t wait to see all you accomplish in this new role!

“Anna Kochien is a force.  Her promotion to director surprises no one (besides those of you who thought she already was a director, HAHA).  Anna is one of the most passionate people I have ever met.  My favorite thing about working with Anna is that I learn from her every day (probably way more than she learns from me, if we’re being honest).  She has built the absolute powerhouse of Personnel Services (almost 20 members and still growing!).  I know she started after me technically, but I can’t remember an ALKU before Anna.

So congratulations on your promotion to Director of Personnel Services, Anna! I am not sure there has ever been anyone more deserving.  You continue to impress and inspire me and all those around you.  I am so excited to continue watching you grow.  Thanks for all you do for ALKU and your teams and for always being such a good friend to me! Congrats!” -Kayla Morrison

“I am beyond excited for Anna’s promotion to Director!!  The quality output, excellent customer service, and dedicated work ethic of the Personnel Services team correlate directly to Anna’s leadership.  I mean, do you know anyone more on top of their stuff than Anna?  Didn’t think so.  Anna truly embodies what it means to be a senior leader at ALKU.  She is dedicated to wanting and getting the best out of her people and everyone at ALKU.  She sets high expectations, leads by example, is involved in many facets of the company, is forward-thinking, and cares.  Everyone who knows Anna knows she’s a lunatic for caring.  The highest of ALKU compliments.  The future is now brighter with Anna helping to steward the company officially as a Director!  Congrats Anna!” -Kyle Ketcham

“Anna was literally born for Personnel Services. I remember the day she started, she got on the phone as just the happiest person who’s ever talked to consultants, and a few days later, she started receiving gifts, notes, and more praise than we’d ever seen from the role. Fast forward from the day she started to where she’s taken the team now, and her promotion to Director of Personnel Services is one of the most deserving promotions I’ve seen. Anna is the embodiment of the perfect ALKU leader–approachable, always leading by example, a wealth of knowledge, a constant motivator, and loved by her team. ALKU is amazingly lucky to have Anna stepping into this role to take the Personnel Services world to the next level. Congratulations, Anna!” -Lauren Pacella