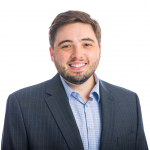 Casey is one of the hardest-working employees at ALKU. He is incredibly motivated, organized, and highly productive. He has done an incredible job growing and developing a new division and continues to go above and beyond daily.

Casey embodies ALKU’s Have Fun Working Hard® culture daily. He has the gift of lighting up a room, whether telling a story or keeping the energy high. He is incredibly approachable, easy to talk to, and has the leadership qualities ALKU looks for in any employee.

Casey will continue to grow and develop the Purchase Order team in his new role. Along with constantly working with Account Managers and clients to ensure we have all the information we need. His role and the teams will play a significant part in the success of the Billing team and ALKU in general.

Congratulations Casey! We can’t wait to see all you accomplish in this new role!

“Casey, from the start, came into ALKU motivated and eager to learn.  It only took him a few months to get up to speed and start making a difference for the team.  One thing I’ve learned about Casey over the years is that he cares so much.  He cares about the development of his team, where we stand with every PO, and, overall, how he can improve.  Case, I appreciate all you have done for the team, and your success over the last few years has been awesome to watch. I know you’re not done yet, so let’s keep this thing rolling!” -Walter Gillis

“Case! I don’t know where to begin, but I am so excited and happy for you. You’ve made a difference from the first day you stepped into ALKU. He’s always looked for ways to better any process we’ve had in place and have taken on numerous tasks and responsibilities. He’s never been shy or nervous about speaking up and asking questions, all the qualities of a true leader. Starting a new group and managing the burn report isn’t an easy feat, but Casey’s done it. I think I can speak for all of Client Services, AR, Cash, and Billing that we’d be very lost without you. I am so excited to work beside you day in and day out and can’t wait to see where you take the PO Team! I know Champ is super proud of you like the rest of us.” -Kelsey Smith

“Casey Loughlin, if you don’t know the name, it’s probably because he has been behind the scenes making things happen for this company without you even knowing it. He created an entirely new sales process from scratch to track purchase orders. This new process has changed how account management is successfully done at ALKU. After that, he created a team under him that continues to follow his lead and work just as hard as he has since day one. He is consistently one of the hardest workers at ALKU and one of the nicest people (not usually a combination, you see!). We joke Casey would never hurt a fly, and that’s right unless it didn’t have a PO in before someone was supposed to start. Casey, I am so proud of the leader and person you have become, and ALKU is a better place because of you. Your mother is so proud! Beers on, Britt and Cuddy!” -Craig Cowen