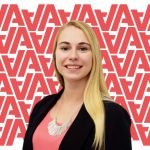 Corrine Paynter started with ALKU as in intern in 2015, coming on full-time in July of 2017 as a Medical Device Recruiter. Corrine found great success as a recruiter and went on to become the 2018 Rookie of the Year, and since then, has made Founder’s Club almost every year that she has worked at ALKU. In 2019, Corrine took on a new venture in her career and was promoted to the Training Center Manager, Durham.

Corrine is extremely organized and gets everything done in a timely and effective manner. She works amazingly with all the teams and groups the Training Centers interact with and is always willing to spearhead new initiatives. Corrine has been pivotal in the continuation and development of our Training Center and Internship Program and has helped to launch many successful full-time careers.

With this and much more, ALKU is excited to announce the promotion of Corrine Paynter to Senior Training Center Manager. In her new role, Corrine will oversee two different training centers and work to heavily improve the Training Centers’ operational efficiency from a technical and operational perspective. She will travel to various Training Centers and help to continue to establish culture and process.

Congratulations, Corrine! We can’t wait to see all you continue to achieve and do for ALKU’s Talent team in this new role!

“Well…well…well, what could I POSSIBLY say about the one and only Ms. Corrine Paynter. I have had the privilege of working with Corrine the last couple years and I could not be more impressed with her commitment, work ethic, and organization. Whenever I need a question answered, a statistic to reference, or have a process question, Corrine ALWAYS has the answers. She has worked closely not only with her colleagues, but every facet of the ALKU business. I have people coming to me practically daily, saying how amazing Corrine is, what a great job she is doing, and how she is the ultimate team player. Corrine has done an amazing job taking over and maintaining the prestigious reputation of our flagship Training Center in Durham. She has continued to advance and improve, not only the Durham office, but the Internship Program as a whole. I am extremely lucky to have such a dedicated and reliable manager like Corrine and I cannot wait to see how she dominates in her new role. Congrats, Corrine and thank you for being YOU!!!”- Andrew Regan, Director of Training Centers

“Congratulations, Corrine!! You took a chance on a new path and have done such an amazing job as a Training Center Manager. Your commitment to training, attention to detail, and relationship building are just a few reasons why you are so deserving of this new role. I am so proud of the way you stepped into the role in Durham. We never have to second guess that what is needed will get done. You are so driven and contentious. The last year plus has been trying to say the least. How you trained, interacted, and did your job was changed. You took the challenge head on and with a big smile and did what was needed and more as you always do. It will be so exciting to watch as you develop this position and continue the evolution of the Training Centers. We are all lucky to have you focusing on the future of ALKU and supporting the Internship Program and Training Centers in a new capacity.”- Leah Bourdon, Vice President

“ALKU has always promoted the most passionate employees who work non-stop to not only better themselves, but everyone around them. That is certainly the case when it comes to Corrine. As a Training Center Manager, Corrine is always willing to sacrifice her own time to help develop every person who walked in the door in Durham. To run a successful Training Center, you need to be able to wear a ton of hats and Corrine made that look easy. She not only developed a bunch of future successful ALKU employees, but she also made sure everyone had a ton of fun along the way. The feedback we received from interns on her team was always fantastic. I have no doubt in my mind that ALKU is in a better place with Corrine stepping up into a Senior Training Center Manager role. Our future is in good hands any time Corrine is involved. Congratulations on your promotion and I am excited to continue to witness you grow into an even better leader!”- David Tuell, Vice President of HCIT