End of the Year Awards Recap 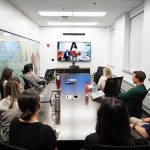 On Wednesday afternoon, the ALKrew gathered with a toast of champagne for the highly anticipated End of the Year Awards! This was a time for the ‘Krew to reflect on what a fantastic year 2022 indeed has been. Leadership and various ALKrew members highlighted recipients who have gone above and beyond and helped LVLUP ALKU in 2022.

The End of the Year awards started with words from CEO and Founder, Mark Eldridge. Mark shared mind-blowing achievements that the ‘Krew has surpassed this year and highlighted that this year had been one of the best in ALKU history. He spoke on various heartwarming initiatives ALKrew members have brought to the company’s attention, and ALKU as a whole was able to help and aid these individuals and initiatives enormously. This was a moment for the entire company to reflect on and realize how much our company has given back and focused on others.

Some of the awards mentioned during this time were ALKrewter of the season, Talent Ally Award, AWE Inspire Award, DE&I Award, and much more. Additionally, President, Andrew Bull took the time to highlight individuals of the ALKrew who have hit Founder’s Club for the first time. This is a massive achievement as there are tough criteria to meet to make Founder’s. This year, there were 45 first-time Founder’s ‘Krew members from Revenue and Talent.

The End of the Year awards wrapped up with a message from Senior Vice President, Jon Kujala. He praised the ALKrew for their hard work and dedication throughout the year. He shared growth statistics, including the launch of three new divisions, four splits to specialize further, 98 ‘Krew members promoted this year, and much more.

Stay tuned for the End of the Year Gala Recap blog! There will be more awards that will be revealed this Saturday, December 10th.