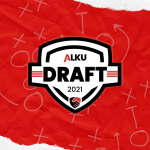 After every intern session, ALKU drafts interns that have accepted full-time positions as well as new full-time hires into their group. Their drafted team is who they will be working with side-by-side so it’s a very exciting time for everyone involved! In typical Have Fun Working Hard fashion, the ALKrew puts together an out-of-the-box draft reveal production! And don’t worry, we’re still over the top even while some of us are working from home.

Two weeks ago, managers gathered on Zoom to kick off Draft Season with a boardroom style draft discussion. Twenty-three picks with full-time offers to start Fall 2021 were drafted to sixteen of our divisions.

After the boardroom draft comes the fun part—the Draft Reveal! Each division puts together a video skit to announce which pick (or picks) will be joining their team full time. This reveal is not only a great way to get the person drafted excited to start full-time at ALKU, but to get the rest of the group amped up about their new team member! This year’s draft continued to show the ALKrew’s creativity with videos filmed over Zoom and in the office. With themes like Mean Girls, Step Brothers, Jeopardy and a celebrity shoutout from The Office’s very own Brian Baumgartner, who wouldn’t be excited?!

Drafted interns, new full-time hires, and the whole ALKrew tuned into the Draft Reveal Thursday afternoon to see who the picks would be!

Welcome to the ALKrew, everyone! Here’s to a great beginning to an exciting career!