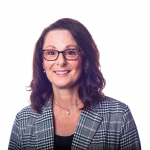 Jeanine Morgan started with ALKU as an Accounts Receivable Manager in 2014. At the time, she was a department of one running collections for the entire company. Today, Jeanine oversees four different groups consisting of 26 employees. During her time at ALKU, Jeanine has been a guiding force behind all back-office revenue operations. She has helped to build an organization that strategically supports the revenue function, while gaining efficiencies in billing and cash collections.

Jeanine is a selfless leader whose primary focus is developing her team and their careers. She is a cheerleader for them when things are going well and a steady guiding hand when things get tough. Outside of her direct responsibilities, Jeanine has become a trusted leader and resource to all throughout the organization. This promotion will come as a surprise to no one.

With this and much more, ALKU is thrilled to announce the promotion of Jeanine Morgan to Senior Director of Accounts Receivable and Billing!

Congratulations, Jeanine! We cannot wait to see all you continue to achieve in this new role.

“When Jeanine was promoted two years ago, and added oversight of billing and client services to her responsibilities, I don’t think any of us could have envisioned what would transpire over the next year and a half. A worldwide pandemic and economic downturn are not ideal circumstances when you’re the one ultimately responsible for bringing cash in the door. Fortunately, ALKU could not have been in better hands. Over the last year and a half, I am not sure I have ever witnessed someone work as hard as Jeanine. Aside from better educating herself on the billing side and working with her new teams to fine tune process, she also kept a bead on all clients and where they stood. Weekly aging reviews with me were not a treat and I can assure you that no one was asked more questions than Jeanine during that time period. All the while, she never lost her cool (and she deserved to) and NEVER slowed down. he success of those teams was a direct result of their leader; a leader that is as widely respected as any in this company. I want to congratulate Jeanine on her well-deserved promotion. More so, I want to thank her. I couldn’t be more fortunate to work with such a great colleague.” – Marc Cirrone, CFO

“I am not sure there is someone that has come in to ALKU and made a bigger impact than Jeanine Morgan. She is the reason I hear people ask, ‘What did we do before we had her?’ or ‘What would we do without her?’ These are great things to hear when someone is responsible for taking care of one of the most important things at ALKU. The money. I have had the pleasure of working with Jeanine from the start, and there are plenty of times where she could let the frustration of issues get the best of her, but she does the opposite. She approaches each one with a perfect mix of calm and logic. To no surprise, they always end up resolved. She has been perfecting her craft and has built a machine on the AR and Billing side from scratch. Thank you for all you have done and taught me, Jeanine, but more importantly thank you for all you do for ALKU. Congrats on a well-deserved promotion to Senior Director! We are lucky to have you.” – Dave Esteves, Vice President of Life Sciences

“Jeanine is one of my favorite people to work with at ALKU; she is always smiling but she’s also no nonsense…and that’s what I like best about her. She is one of the most diligent, hardworking, and devoted leaders in the company. The level of care Jeanine has for her job and her teams is unmatched. She deals with a lot of issues for all the revenue groups and does it with such poise and ease-I don’t know how she does it. In addition to doing her job exceptionally well, she brings the fun to her teams and leaders. I can say first hand that meetings with Jeanine’s team are some of my favorite and that’s a testament to her ability as a leader. Congratulations on this well-deserved promotion to Senior Director! Don’t ever change!” – Tarah Lovato, Director of Pharmaceutical and Government Sales