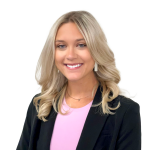 Jenn started her ALKU career as a Human Resource Intern at the Amherst Training Center. In June 2018, Jenn began her full-time ALKU career as the first official Human Resources hire, where she started to build the Human Resources team from scratch. Jenn immediately proved a great culture fit and had a knack for Human Resources. Within a year, she began working towards her SHRM Human Resources certification, which she decided to complete independently. She was eager to educate herself further and passed the exam on her first try.

Jenn has built the Human Resources team from just herself to a team of 9 with multiple leaders and has done so with ease and a smile in the office daily. She has shown how essential she is to Senior Leadership through many Human Resources avenues, and she deserves to join the ranks of Senior Managers. Not to mention in 2020, she was the CEO’s choice.

This year Jenn began to develop managers, and it came as naturally to her as it did with everyone on her team. Today she continues to grow her team and become bigger and better in the Human Resources world.

Outside Jenn’s day-to-day role, she participates in just about all ALKU contributes to. She has participated in the Falmouth Road Race and Rodman Ride, attended ALKU Gives Back events, and much more. Jenn is also involved in all aspects of Diversity, Equity, and Inclusion (DE&I) and Employee Resource Groups (ERGs) at ALKU. Every day she continues to Have Fun Working Hard® and to excite her team. She is an incredibly essential resource to all of ALKU.

In her new role, Jenn will oversee the entire Human Resources team, two leaders, and two pillars of executive support and employee relations, transitioning from desk-level manager to senior manager and stepping up to become a company-wide leader.

Congratulations Jenn! We can’t wait to see all you accomplish in this new role!

“Senior Manager Jenn just makes sense; there is literally no one better than Jenn. Almost from the day that Jenn started as an intern at the Amherst TC, it was multiple times a day that I heard from others or found myself asking, “What did we do before Jenn?.” Jenn has come into ALKU and made everyone’s lives easier. Whether running the Covid Task Force meetings or helping with a difficult HR situation, Jenn is always the one doing the hard things others would struggle through doing. She immediately proved herself as an employee and was given a leadership opportunity where she did not disappoint. With an HR team of 9, Jenn now finds herself stepping into a Senior Manager role because she has proven that she is just as great at developing managers as she is at developing employees. Jenn is in the office daily with a smile on her face, helping with everything from compensation, to DE&I efforts, to HR trainings. I often think back to the day we hired Jenn and realize it was one of the best decisions we ever made. She has truly made ALKU a better place to work for all and is so deserving of this Senior Manager promotion. Congratulations, Jan! No one better than you.” – Lauren Pacella

“Jenn made an impact at ALKU as soon as she started.  As one of the first employees hired into our HR department, she was immediately faced with handling the pandemic and building up her team.  Not only did Jenn successfully navigate one of the most difficult times, but she also established herself as a leader and trusted resource.  She has since grown the HR department and has developed leaders in her team.  Jenn is a classic example of an ALKU leader who seized the opportunity that was in front of her. Please join me in congratulating Jenn Riedl on her promotion to Senior Manager!” – Andrew Bull

“There aren’t many people who can say they have gone through what Jenn Riedel has gone through over the past few years being the face of HR through a global pandemic,  but it only made her stronger. She took on the challenge on top of her already heavy workload with enthusiasm, leading to great problem-solving.  Having HR run by such a strong leader like Jenn allows our leadership team and company to strive. She is someone you can always count on to make the best decisions in some of the most difficult times. Given the rapid growth of ALKU, Jenn has had to adapt her department to many changes- and has done so with thoughtful innovation and excitement.  Congratulations on this promotion and many more to come in the future! It is a pleasure working alongside you!” – Dave Tuell

“Congratulations, Jenn! You are one of the most consistent, calm, and rational people….exactly what we need in HR. You started this role from scratch and have not only been steadily building this role but also creating a department. Your commitment to critical thinking, developing sound practices, and building a team of unique resources has benefitted all of us. ALKU is lucky to have you! You continue to be a person I can rely on for advice and a neutral opinion. I am excited to see how you continue to grow!” – Leah Bourdon