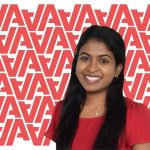 Kirishika Krishnarajah was a Babson College ALKU Intern who started as an Epic Recruiter. She saw substantial success early on in her internship. After graduation, she became a full-time ALKU employee and began her SAP Recruiter role.

Kirishika deserves this promotion tremendously as she continues to lead by example daily. She puts her employees first and has created an unmatched culture in SAP that absolutely anyone can thrive and succeed in. She brings an upbeat attitude to work every day that is contagious to those around her and makes everyone have a fantastic day.

In her new role, she will be responsible for developing recruiters and the entire SAP group.

Congratulations, Kirishika! We can’t wait to see all you accomplish in this new role!

WOWWWW, LFGGGGGG, WHAT A DAY TO BE A BEAVER ALUM!!!!!! This promotion is so incredible for so many reasons. It all started when we took you first overall in the 2019 draft, and you haven’t been disappointed. During the covid years, you were already leading by example without even knowing it by staying positive and working hard when many would have quit. Your resiliency helped SAP hit a spread high only a few months after covid, and the group has been looking up ever since. The more we give you, the more you shine, and it shows from the new recruiters you have developed, hitting a spread high of 54k and growing the SAP spread by 50k since being on a roadmap!! This promotion is so well deserved, and I can’t for you to lead SAP to 200k!! – Dan Alberico

Kirishika!!! Congratulations on your well-deserved promotion to SAP Recruiting Manager! You have worked so hard to get to this point, and I couldn’t be happier for you!! Kirishika impresses me every day with her lead-by-example mentality and does an incredible job holding her team accountable. Over these past few years, you have transformed from a heads-down recruiter to a vocal leader that recruiters naturally follow and have continued to lead SAP to the success that it is at right now. At the beginning of this year, SAP was averaging around 115K. Fast forward to 7 months later, and the group hit an ALL-TIME spread high of 184K under the guidance and leadership of Kirishika and Cora. No doubt in my mind that you two will lead SAP to 200K for the first time! Congratulations again – we are so proud of you!! – Micaela Damiano

Kirishika! Congrats on your PROMO! This is extremely well deserved!! I think back to when you started in SAP three years ago and how much you’ve grown as an individual contributor and a leader. Kirishika is a natural- as both a leader & a recruiter, and people have always gravitated toward her since day one. She leads by example, is always willing to help out anyone in need, and has a competitive drive that her team has now followed suit. While on her roadmap, she almost doubled her spread, led the group in deals, and continued to develop her employees to hit new spread highs (while she traveled the world)! Kirishika and Cora have created a new culture together in SAP that we’ve never seen, and it’s led them to bring the SAP team to hit spread highs in recent weeks. The two of them together have created a new dynamic and standard for the team that will continue to bring SAP to achieve new milestones. OFC, this promo happened, the best person for the best opportunity. Congrats, KK- I can’t wait to celebrate with you!! – Erin McCormick