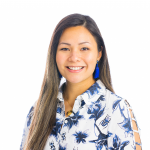 Maria has been a staple in the Government brand from early on. She started as an intern in June 2014 and began her full-time ALKU career in January 2015. Today, Maria manages one of the largest groups at ALKU. Throughout her career, she has developed numerous successful sales individuals and upcoming sales leaders. Maria is one of the most positive, enthusiastic, and passionate leaders at ALKU.

Maria continuously brings energy with nothing but a smile on her face. She is a long-time BEST Kids 5K fundraiser and actively participates in volunteer opportunities. Additionally, she is a member of ALKU’s Employee Resource Group, ALKU Women Empowered (AWE), State of Mind, and Parents Group. She was also one of the original members of the DE&I Council.

Congratulations, Maria! We can’t wait to see all you accomplish in this new role!

“Maria is one of the most positive and enthusiastic leaders you will probably ever encounter. These traits make her an excellent salesperson and an even better leader. Maria manages one of the largest groups in all of ALKU. She does this with ease, always having a smile on her face, bringing energy, and leading by example. She is more than impressive and probably the most humble leader I know. When I think of Maria, I think of someone who cares. She cares for her team, the Gov brand, and ALKU and about being the best version of herself. She is constantly looking for areas to improve, adding strategy, getting creative, and constantly challenging herself and her people. The Gov IT group will be splitting in 2023, and Maria will have oversight over legacy Gov IT & the new group, Gov DCI. I am excited to see the impact Maria continues to have within the Gov brand and am confident that with her leading the charge, success is inevitable. Congratulations on your very, very well-deserved promotion, Maria!” -Tarah Lovato

“If you were to find Maria in the dictionary, it would be next to the words: positive, passionate, and smile. Maria has the ability to remain positive through the highs and lows of this job, but most of the time, she is riding a high because of her relentless work ethic.  Maria has been devoted to helping the government brand grow since day 1.  Starting it off by beating Ryan Rudich in a dials contest as an intern…  As surprising as it may seem, Maria may have one of the most under-acknowledged careers at ALKU, given all that she has accomplished.  Most of the time, this is because she isn’t slowing down to take the credit, or if she is, she is telling you why others in the IT division are responsible for its success.  The truth is that Maria has been everywhere, for everyone, all the time.  She took the group’s growth into her own hands early, transitioned that growth to helping newer AMs get up to speed, and now is working with the beginnings of starting another group. I am convinced that no one can rival Maria’s excitement and pride in her teams and people.  She devotes every second of every day to helping someone get better.  If you are willing to put in the work, she will be with you every step to help you achieve that. These things have earned Maria this promotion to help lead the DCI and IT sales teams.  She has perfectly defined what it means to “create your own opportunity” at ALKU.  I know this leap to Senior Manager will be approached with the same tenacity that you carry into the office every day, and I can’t wait to see what you can accomplish in this new role.  Thank you for all you do, and congrats on such a well-deserved and earned promotion. Celebrate this one!” -Dave Esteves

“Maria has always led by example. From intern to Account Manager to Division Manager, her desire to succeed and show others how to succeed never stopped. She has built an impressive sales team and has started to pave the path for new leaders to step up.  She does all of this with infectious positivity and a smile on her face. She cares about her people immensely. Maria’s peers truly enjoy working with her, and her leadership abilities extend beyond just her team.  We’re all looking forward to watching as Maria grows her teams and lifts new leaders at ALKU.  Please join me in congratulating Maria Rose on her promotion to Senior Manager!” – Andrew Bull