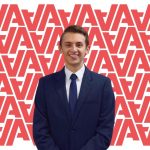 Michael Bachilas started with ALKU in October of 2019 as a Staff Accountant. Since day one, when he walked through the doors of 200 Brickstone, Michael has gone above and beyond. Within six months, Michael became a driving force within the Accounting team, taking on a considerable workload for the Life Sciences and ERP divisions, and has been a role model for others on his team.

During Michael’s tenure, the company has experienced significant growth and he has continued to keep up with his original tasks in Payroll and Benefits Accounting while taking on additional revenue responsibilities so his team could produce at a more efficient level.

Michael is an exemplary corporate employee, making strides towards bettering himself but also in his involvement in the company. Last week Michael ran in the Boston Marathon in support of Mass Mentoring Partnership, running over 300 miles during his training. Michael is also a member of ALKU’s Pride Employee Resource Group and will be going outside of his comfort zone as a presenter in the upcoming Quarterly Update.

With this and much more, ALKU is thrilled to announce the promotion of Michael Bachilas to Senior Accountant! In his new role, Michael will continue to be a driving force in Payroll and Benefits Accounting. While working with and training new team members, and helping the team stay efficient as ALKU continues to grow.

“Michael, I couldn’t be more excited to write this! For those who have worked with Michael, you know how much time and effort he puts into everything he does. He is a driving force within the Accounting team and is constantly improving upon processes and making what he already does well, even better. Despite everything he has on his plate, he is always happy to drop what he’s doing to help someone else. Whether it’s working with a manager tracking a bonus or collaborating with a corporate team member. His attention to detail and ability to stay level-headed and calm during busy weeks are just a few of the reasons he has always been an exemplary employee, but he has stepped it up even more in the last six months. He has taken on more work and built relationships, all while casually training for the Boston Marathon! I am so happy for you and can’t wait to see what you do next! Congrats, Michael!!” – Hailey Giampietro, Manager of Financial Planning and Analysis

“Michael has been a perfect example of everything we look for in an employee since he started. He is always going above and beyond to take on more tasks. Making sure he understands every detail of what he is doing. Most importantly, he is always willing to help any employee in any department regardless of how much he has going on himself. Michael is responsible for various accounting tasks, and is often improving them as soon as he gets involved. He completely revamped our bonus tracking process and truly made it his own. Michael is always willing to meet with managers to ensure they have the full picture. Michael’s patience, willingness to always go the extra mile, and positive attitude will continue to make him successful in this new role. Congrats Michael!” – Jon Martel, Senior Director of Finance

“Michael!!!” <-- this is my exact response anytime I reach out to or hear from Michael. Is it because I love using full names? Maybe. Is it because I have an addiction to employing an unnecessary amount of exclamation points? Also, possible. The reason lies not in the response but in the person responsible for eliciting it. Michael is one of the most genuine, hard-working people at ALKU. For those who don't know, a lot of Michael's job revolves around holding myself and my team accountable. His desire to help others while simultaneously improving his skillset is truly a sight to see. I love working with him for a variety of reasons, but two things stick with me. Michael cares, plain and simple. He doesn't come your way looking to get the quick answer he needs, instead he actively listens. He wants to know the "why" behind it to make things easier going forward. Michael is one of the most personable human beings. I frequently bring my problems his way, 99 out of 100 times I'm leaving that conversation in a better spot than I was when I showed up. 99% success rate for those keeping score at home. Most people don't take time to care about the little things, but that's what makes Michael so great at what he does. Michael, my friend, Congratulations!!” - Nick Dempster, Payroll Manager