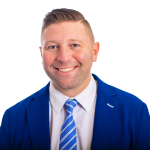 Michael started as an SAP Account Manager in 2011 as part of ALKU’s original core. He quickly saw success and became the SAP Sales Manager in 2014. While in this position, he developed vital Account Managers that have contributed to ALKU’s success today. Michael then took on the role of Senior Sales Manager for SAP and Oracle Cloud. After completing countless accomplishments and milestones, he gained the opportunity to build the Healthcare IT brand as the Director of Healthcare IT & Cybersecurity. In addition, Michael has played an integral part in building and developing the Epic and Cerner brand and creating ALKU’s Cybersecurity and Data Science groups.

Michael displays a passion for making everyone around him better by going above and beyond to help others. He pays great attention to detail and execution, revealed through his development of all Sales and Account Managers. Michael has the fantastic ability to grow others to reach their full potential. He is always the first person to raise his hand to any opportunity that will make ALKU a better place to work. Additionally, he is heavily involved with ALKU’s DE&I Council and much more.

Michael will lead the entire Sales force within the Healthcare IT, Cybersecurity, and Data Science brand in his new role.

Congratulations, Michael! We can’t wait to see all you accomplish in this new role!

“Where do I start to talk about someone who has been my closest friend and business partner over the past ten years? Michael’s passion for ALKU and staffing is so contagious that you can’t help but be excited to come to work every day. He is always looking for ways to help everyone around him. You can call him anytime, day or night, and he will be ready to talk shop. I appreciate OB’s honesty and ability to keep it real the most. Over the past ten years, we haven’t agreed on every point or approach to solving a problem- but in the end, we always come up with a solution that fits us both without holding a grudge. You rarely get the chance to work with someone you trust as a friend and a colleague, and I am grateful for that. OB, thank you for being an inspiration for me and so many others. We leaders in the HCIT/Cyber/DS should consider ourselves lucky to have you on our side as we continue to dominate the market. Cheers to this promotion and all your success at ALKU and as Julien’s Dad!” -Dave Tuell

“Mike has been a staple at ALKU for over a decade. From Account Manager to a leader, Mike has always brought great energy and a passion for the business. He has taken on multiple Leadership challenges and has continued to take risks in his career at ALKU that have paid off for him and the company. He was an integral part of the HSG acquisition; without Mike, that transition is not nearly as smooth. He always sees the best in his people and looks out for those who work for him. We can’t wait to see what Mike will accomplish next in his ALKU career. Please join me in congratulating Mike on his promotion to Senior Director!” – Andrew Bull

“Michael has given so much time and dedication to ALKU during his eleven years here. His list of accomplishments are a mile long, and this promotion reflects the effort he brings to the table every day. Besides being one of the all-time highest producing Account Managers in company history, he has spent the rest of his time developing people and leaders across multiple divisions. He has played a major role in helping take ALKU from a company with ten employees to a company with over 400 employees. Without that constant desire for success that he brings to the table, the entire HCIT brand would not be where it is today without him. To the guy who brings all the energy and fun to the HCDC squads daily, congratulations on the promotion, OB! Happy to work alongside you and thank you for everything you have done to help build this empire where it is. Cheers, my brotha!” -Tyler Bush