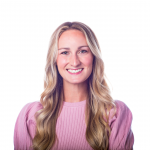 Patricia has found ways to split and continue creating more for her people and will now be responsible for six revenue groups. Patricia has successfully built strong teams that have won multiple division of the year awards for the Medical Device groups. Year after year, Patricia has taken Medical Device to new heights.

Patricia is constantly empowering her employees and leading by example. She has wholly owned the Revenue Senior program and has one of the most diverse groups at ALKU in Medical Device QA.

In her new role, Patricia will oversee and continue the growth of all medical device divisions and their leaders.

Congratulations, Patricia! We can’t wait to see all you accomplish in this new role!

“Patty Blanchard has already established herself as one of the most successful leaders at ALKU. She has, far and away, earned this promotion to senior director of Medical Device recruiting. The “scary” part is that she is only continuing to get better…even at the Senior Director level.  Patty’s consistency in her drive, devotion to her people, and dedication to ALKU as a whole are something that I admire.  I don’t think Patty has ever asked for a promotion, and I promise you…it is not for lack of urgency.  Instead, it shows what a truly inspirational and empowering leader is capable of if you have the thirst and urgency for growth like Pat.  She constantly goes the extra mile, not worrying about who is watching or when.  She gives every task her all and consistently asks how she can better her people and herself every day.  She can hold people and herself accountable at every single stage of the job without losing an ounce of inspiration or empowerment.  She is unbelievably dedicated to her groups and their respective leaders, which has led to some of the most impressive success stories at ALKU from a revenue and leadership perspective.  No one has a crystal ball to look into the future, but sometimes I’m convinced Patty has something close to it.  She can figure out how to improve before anyone else thinks improvement is necessary. Pat – thank you for all you do and continue to take on.  We all are lucky to have a leader like you – and I know Medical Device will do nothing but continue this amazing run with you as Senior Director.  Congrats on an unbelievably well-deserved promotion.  You’ve earned it.” -Dave Esteves

“Patty is one of ALKU’s strongest leaders.  She has built a world-class recruiting leadership team.  Her people love working for her and know that she’s always pushing them to be the best versions of themselves.  Patty continually forces herself and others out of their comfort zones.  Patty’s peer group respects and appreciates her team approach and creative ideas. Patty is more than just a leader in the med device world; she is an ALKU leader.  Please join me in congratulating Patty on her promotion to Senior Director!” -Andrew Bull

“Patty just straight up loves staffing. In every meeting, I’ve ever had with Patty, whether one-on-one or in a group setting, she is always so engaged and interested in learning more about the business or being a better leader for her team. She is the person you want as part of your group project because of her relentless approach to getting things done. Whenever Patty is part of a certain committee or a decision is left to her, I know it’s in the right hands. Med Device has been the bar of excellence at ALKU for many years, which is a tribute to what Patty helped build. The Med Device leadership team is strong because of Patty’s ability to transfer her knowledge of staffing in such an impactful way. Patty has built up respect among all employees, both in and out of her brand, by proving her work ethic and ability to scale her brand so damn well. Congratulations on this promotion and so many more! It has been an absolute pleasure working with you over the years!” -Dave Tuell