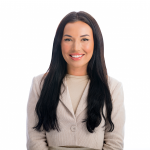 Shannen began her ALKU career over five years ago. During that time, she accomplished countless victories. She started in a start-up division and was instrumental in building Epic’s team’s success on both the recruiting and sales side. When the COVID-19 pandemic arose, Shannen was the motor behind building the team and led the team to reach new milestones.

Shannen can do it all when it comes to the world of staffing. She has taken her knowledge and successfully transferred it to so many talented individuals since becoming a Sales Manager two years ago. Her team loves working for her. They have vocalized that they wish every employee at ALKU could get the opportunity to work with Shannen.

Shannen is a culture creator and, overall, an inspirational leader. She is an active member of ALKU’s employee resource group (ERG) ALKU Women Empowered (AWE). In large part, Shannen received the AWE inspire award for her work developing other female sales professionals. Additionally, she has helped spearhead several VTO opportunities for the Epic division. Annually, she participates in the Salvation Army fund at the end of every year and rides/raise money for the Rodman Ride for Kids.

Congratulations, Shannen! We can’t wait to see your accomplishments in this new role.

“Shannen Ketenci is one of the best leaders I have ever worked with. She began as a full-time employee in 2017 and chose to join a start-up rather than an established division. She flourished in every role we gave her as an individual contributor. Recruiter, Account Manager, didn’t matter; she was awesome at it. She gets how to close deals. What’s scary, though, is that as good as she was as an individual contributor, she is even better as a leader. She has a team of Account Managers who owe much of their success to the lessons she teaches them daily. They would do just about anything for her. She took them and the Epic team from the lowest of lows during the pandemic to new heights this year. Shannen has energy, passion, and charisma that is contagious and fun to be around. If you are lucky enough (like I am) to be able to work with her daily, you learn from her, laugh with her, and vent with her. This promotion is extremely well deserved, and I’m very excited to see her dominate this new role as she has in every previous role. The company is so lucky to have such an inspirational leader like Shannen, and I’m so happy that with this promotion, more people will be able to experience that. Thank you for everything that you do, Shannen, and I can’t wait to celebrate!!” -Dan Lyons

“My favorite thing about Shannen is her extreme honesty. She might not tell you to want you to want to hear, but it’s always what you need to hear. If you are on Shannen’s team, you know she has your back no matter what- and I’ve been on both sides of that. Her passion is contagious- you can tell if you spend time with the Epic Sales Team. Not many sales managers at ALKU have a better track record of getting account managers up to speed with the efficiency that Shannen has so far in her career. From the moment she joined Epic as a recruiter from the Durham TC, we could tell she had talent. I didn’t know then that we had one of the best leaders in the company. As much as Shannen has accomplished, I’m even more excited about her potential. Congratulations on your promotion to Sr Manager & thank you for always being the person to challenge everyone around you to be better!” -Dave Tuell

“Shannen Ketenci – I do not know where I would be without you, but surely not here. Shannen was the first desk-level person I met at ALKU. Right away, I noticed she was passionate (LOUD) about her job and team, an extremely hard worker, and very talented on the phone. She spoke her mind and cared so dang much… did then, still does now. Shannen was the FIRST Epic Recruiter and the OG member of the Epic team. She took a chance on a start-up as an intern, and look where she is now 😀 Nothing changed when Shannen became an “official” leader as the Epic Sales Manager. In my mind and the team’s mind, she was already a leader/manager. Shannen loves a good, drama-filled story, so it is only fitting that she became the Epic Sales manager when Epic was at the lowest of lows. Naturally, she was forced into the role of not only Sales Manager but therapist, entertainer, motivational speaker, teacher, and mom. Shannen’s business savvy, guidance, care, passion, patience, and dark humor brought Epic to new heights in the summer of 2022. That is an unbelievable achievement, but almost impressively, SK did that with an entirely green sales team (who were trained over zoom during the pandemic). Shannen is the first Sales Manager to manage an all-female sales team at ALKU; she has helped guide several AMs in Epic, has survived three golives (IYKYK), and has helped develop recruiters like myself, Carly Flahive, and Lucas Townsend. She has successfully brought a division and then back to life again. While she has already been working with Cyber for the past few months, I am so happy she is “officially” official as the Senior Sales Manager over Cyber and Epic. The passion, care, and unhinged mentality – “I not only want to win, but I refuse to lose” – that SK brings to the table is something Cyber is so lucky to see and learn from in real-time. There is no one I would rather go into battle with than Shannen; that says it all. Cheers to the most caring and passionate ALKU employee I know. Proud of you, SK. You deserve this and more.” -Delaney Nalen