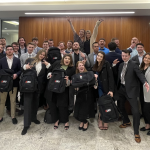 ALKU wrapped up the UNX Games Sales Competition between University of New Hampshire and University of North Alabama. The Wildcats and the Lions brought the competition to Nashville, TN last week!

On the first day, the students went through round one of the final case study. They brought the competition outside of sales for some intense rounds of Mario Kart. After, the ALKrew Lions and Wildcats headed over to the Row for a fun filled dinner!

On day two, the students and the rest of the ALKrew saw the competition go down live in our viewing rooms. Prior to final rounds, viewing rooms are not open at all.

The students who made it to the final rounds determined the overall winners of the UNX Games. All the students received ALKU swag to celebrate making it to the end!

The University winner was names based off a point system that the students were scored on. Both teams were equally fierce competitors, but UNH was the overall winning team that took home the title!

A huge thank you and congratulations to Hailee Centrella who spearheaded this program and brought it to life for the second year in a row!

Overall, this competition was a great success, we cannot wait to see what the competition holds in 2023!